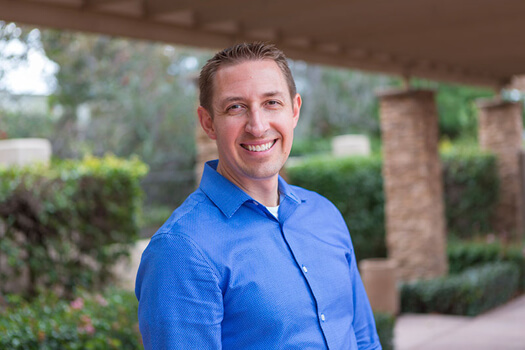 Dr. Bunker graduated with honors from Boston University School of Dental Medicine in 2009. He left Boston not only with his DMD but also his love for the Boston Sports teams and a deeper appreciation of San Diego winters.

He and his wife, Brittany, were thrilled to move back to San Diego where she grew up. 5 kids later they are still loving living and working in the community they are so familiar with and are so happy to be a part of.

When he’s not improving smiles at the office, chances are you’ll find Dr. Bunker at home trying to make his own kids smile with his attempts at making forts, painting his daughter’s toes, and arming himself with light sabers and foams swords for epic pillow fight battles. Dr. Bunker loves spending time with his family, especially if it involves the beach, a soccer ball or a date night with his wife.

Dr. Bunker speaks Spanish and Portuguese and has been privileged to share his dental skills on various medical missions in the Philippines. He is an active member in the American Dental Association (ADA), the California Dental Association (CDA), as well as the San Diego County Dental Society. Dr. Bunker finds great joy using his expertise and knowledge of state of the art dental procedures with cosmetic, restorative and preventative dental treatments including Invisalign.

Font Resize
Contrast
Accessibility by WAH
Call Us Text Us